Well, THAT was something. 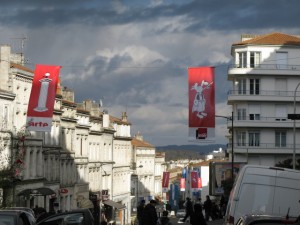 Bear with me; I’ve never done a “con report” or a “festival recap” before. I think they often involve the blogger talking about the convention day by day, being very thorough about covering everything important that happened, the most buzzed about books and news and who’s who. I’m sure there’s tons of that already out there for people who care about what happened during the Festival Internationale de la Bande Dessinée 2012 which means I don’t have to do it here. Thank goodness.

To tell the truth, there was a lot that I missed. You would think that four days would be plenty of time to see everything that this festival has to offer, but it could have been a week long and I still might not have seen it all. Of course, the fact that I live here now relieved a lot of the “must see it all right now” burden.

Take, for example, the Art Speigelman exhibitions. There’s his retrospective at the Castro building (that building which my apartment complex is attached to) which is supposed to be fantastic as well as the show he curated at the comics museum across the river called “Le Musée Privé d’Art Speigelman.” This is sort of like Art’s personal history of comics, taken from both the museum’s collection and from various collections in the US. The opening was on Wednesday night and I stumbled over to check it out a few hours after my whole transcendent 24hBD experience. It was kind of crowded, so I decided not to actually look at anything and to come back after the festival is over (we’re going tomorrow). But I have gotten confirmation from several sources that it’s a very good show. They say that Angoulême is completely transformed when the festival starts, and this is definitely true. There’s the banners and new signs directing people to this or that tent, but then there’s also little loudspeakers wired up throughout the city.

The loudspeakers announce events as they are about to begin. And, when there are no events to announce, music:

Hergé got a makeover, with new glasses for every day of the festival:

And then, of course, there were the crowds, which are absent from Angoulême for 361 days of the year.

Inside the tents themselves, it was sometimes hard to move: But who am I to complain that too many people are into reading and buying comics?

And I guess this wasn’t even as crowded as usual. According to Bart Beatty, this years’ attendance was markedly down from previous years.

Being an artist has its perks. I heard that there was a special room for “professionals” in the Hôtel de Ville, the giant castle that is Angoulême’s city hall: And lo, it was true. A flash of the “auteur” badge and you’re in a big fancy room with free coffee and cognac all day long. This is where the press could comfortably work on and file all those professional con reports I was talking about. A lot of us ended up coming here whenever we wanted to take a break from the action outside.

Some of my time each day was taken up by signings at the Steinkis/Atlantic booth. I’m a small fry and my French publisher for Comment Comprendre Israël en 60 Jours ou Moins is a new one with only two graphic novels to its name so far (me and GB Tran’s great Vietnamerica) so we shared a booth with Atlantic, who do comics of a more alt bent. Both Atlantic and Steinkis are run by Moïse Kissous, who is the boss at Jungle, who publish super mainstreamy stuff like the Simpsons. This is the part of the blog post where I remember that no one really cares about my French publisher’s family tree. Excuse me. The point is, we were in the “comics and manga” tent and I don’t really think anyone who was there looking for comics (“comics” meaning superhero type stuff in France) or manga would really be looking for a book like mine, thus causing some confusion when people picked up my book. But it was nice all the same and the Atlantic guys were a fun group.

There were tons of interesting looking panels but I didn’t really get to very many. Here’s Joe Sacco, Josh Neufeld and Mana Neyestani talking about comics journalism: The talk was appropriately documented: One of the highlights for me was the Concert de Dessins. A band played arrangements of traditional French music (and maybe their own music too?) while a suite of artists took turns drawing a story. I’ve seen this sort of live drawing before in France. Back in 2009, Blutch improvised drawings inspired by the work of Sun Ra as it progressed over his musical career:

The artists here at Angoulême were Bastien Vives, Craig Thompson and five others (whose names I can’t seem to find on the event page of the festival website), working on a script by Arnaud Le Gouëfflec

Here’s the finished story all the way through (although I missed the first two panels in which the thief creeps up on a Maltese Falcon type sculpture and then begins to run from the police):

Comics festivals can be great and all, but watching other people draw is what makes me want to leave the fairgrounds immediately and get to the drawing table.

The festival sponsors several official exhibitions, usually based on regional selection of cartoonists. There was a Swedish comics exhibition and a Spanish one that I didn’t see. I did manage to check out the Thaiwanese comics tent and an exhibition called Europe Se Dessine (Europe Draws Itself). The Thaiwanese comics exhibition might have been interesting if they had been displaying originals, but there were just copies of the books and then reproductions on the walls.

Call me crazy, but I think that if you can’t display originals, there’s no point to having an exhibition. Looking at reproductions is kind of a tease.

Some of the best exhibitions were part of the “Off” festival, which are, as far as I can tell, exhibits and events that don’t fall under the official FIBD jurisdiction.

The highlight of this was “Dog”, an exhibition of original pages from Vincent Perriot‘s new book of the same name. This exhibition, like the Thaiwan one, was also in the Hôtel de Ville, but the wait for this one was long and took the visitor inside some room that seems not to get used very often.

They only let in 18 people at a time. We wondered why this was until it was our turn. To get to the show, you climb up two stories worth of narrow stone spiral staircase…

…and then at the top, you reach a tower room with stone vaulted ceilings where where the exhibition is mounted:

I love Vincent’s work and these drawings are amazing to see in person. Well worth the wait:

That’s the artist in the background, who seems to have spent all day every day drawing in books for people in his tower. Seeing as how most of us whine about doing dedicaces for a few hours, that’s pretty impressive stamina for a show.

The “Off” exhibitions were all over town. Some I would just stumble upon, like this storefront leant to a group of local comics artists who were adding new work to the walls as the days wore on: I followed some signs to an exhibition that was in the big cathedral:

An exhibition of artwork from illustrated bible stories! As part of the Festival of Christian comics? That’s fitting, I suppose. But not anything that I care to stand in line for (this show had a wait to get in because the artist was doing signings inside): In a different Church across town was an exhibition of comics from Africa called “Afrobulles” (Afrobubbles). Then there’s the off off stuff, like this portrait artist who will draw you as a manga character: I saw most of these shows on Saturday, which means I was on day three of packed days, long nights, and little sleep. I tried to find a car that would match how I felt and found it near the small press tent:

Of course, part of what makes Angoulême such a great festival is getting to spend so much time with such a great group of artists and publishers. I felt really lucky to see people I already know from the US and European comics scenes, and also to be able to meet and spend some quality time with some of my personal comics heros.  Maybe its the setting (Angoulême is spread out over more space than, say, the Bethesda Marriott but is less vast than New York City), or the fact that four days allows people to relax a bit, but people were generally in very good moods.

Here’s Dan Berry, a cartoonist from England who maybe had the best looking comic to come out of 24hBD and Eleanor Davis. I’m ooing and ahhing over Eleanor’s sketchbook:

Dinners are the best part of the day and usually involve parties of 10 or more. Here’s a photo from dinner with the Belgian based Employe du Moi‘s Max de Radigues and Pierre Maurel. Max’s book “Pendent Ces Temps à White River Junction” about his year as a CCS fellow was nominated as part of the Angoulême official selection. At another dinner with my Dutch publisher Oog&Blik, Joost Swart drawing on napkins to pay for his meal: Joost’s wife picked up one of the coolest kid’s books I’ve ever seen: New York en Pyjamarama by Michael Leblond and Frédéric Bertrand. She demonstrated its magic:

(its published by Le Rouerergue)

I didn’t take any pictures at Le Chat Noir, the Mercure, or any of the other places that people tended to congregate at the end of the nights. By that time, documenting the festival for a future blog post just didn’t seem like a priority somehow. Just imagine a kind of not very cool bar filled with very cool people (I think le Chat Noir is popular during the festival just because its centrally located and pretty large, its not exactly the most romantic of bars).

On Sunday evening before dinner, le Chat Noir was closed so we went to the bar next door, la Souris Verte instead. Chat Noir, Souris Verte, get it?

At this point, the whole city seemed exhausted but still standing and not hating comics just yet. Everyone in the bar seemed to be either reading comics: While we were discussing worst jobs ever held, it was discovered that Brendan Leach and Mike Dawson, who were signing next to each other at the Ça et La table both worked at the Great Adventure theme park in New Jersey during the same summer. Spooky! Mike used to draw caricatures. He demonstrated his technique with a portrait of me: 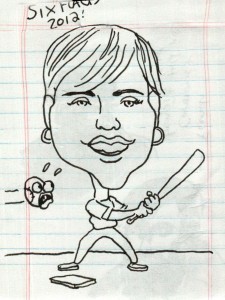 Now I don’t feel like I missed out by not getting a manga portrait done.

And then all of a sudden, the festival was over and everyone was gone. I walked to the supermarket this afternoon when I woke up and found the streets back to their normal empty states.

Was any of this even real? I saw on Twitter that Josh Neufeld feels similarly:

Good times. But after all that I’m excited to get back to work. Full steam ahead in sleepy ole Angoulême.