In a few days I’m going to put up a post on some frequently asked questions related to the residency at the Maison des Auteurs. One of the most frequently asked of the questions I get is: Do I need to know how to speak French to be a resident? No, you don’t need to speak French to be accepted into the program, but your life in Angoulême will be much, much more enjoyable if you can speak it at least a little bit. Its hard enough adapting to life in a new city and meeting new people, and that can be all the more difficult if you can’t talk to anyone. 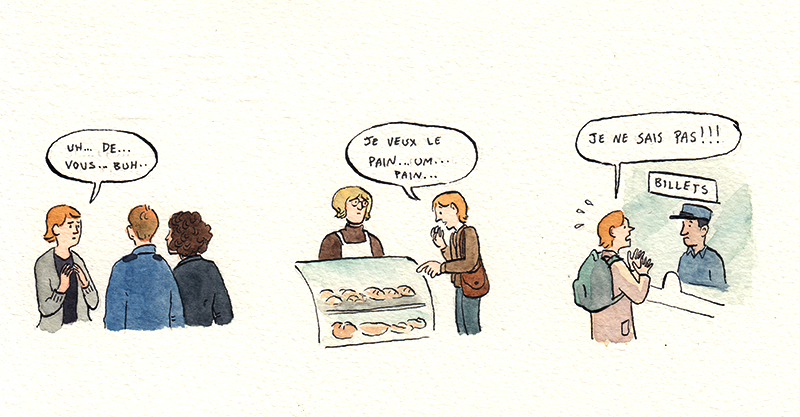 By the time I got to Angoulême, I had been studying French on my own for a couple of years. I still struggled to keep up with conversations at dinner parties for the first couple of months, but after a while it got easier. Living in a place where you are forced to speak French daily is definitely the best way to learn the language, but I’m very glad I had put in the work beforehand.

After a year in Angoulême, I was fluent enough to talk in groups, attend lectures, and even moderate a comics panel at the festival. But now I’ve moved to Buenos Aires and I’m doing all of this again with Spanish. Day by day I can feel all that work trying to get a hang of French slipping away. Oh well!

But this is about French. Here’s a list of some of the resources and methods I used to get to kind-of-semi-fluency.  This list is probably going to be a bit dated because I started doing this in 2009, so please feel free to add your own suggestions in the comments.

I did have a few years of high-school French in the junk-drawer of my brain already, but it still almost felt like starting from the beginning. I took a six week class at the Alliance Français in New York, but those classes can be expensive, so after that I decided to keep at it on my own.

I found this post by searching for “learning French” on AskMetafilter. You can probably just read it and skip all my advice, although a lot of it might be dated by now. I took his tip to order a book of grammar exercises (I used the Schaum’s guide) and went through it copying out every exercise. I know this might not sound that appealing, but for some reason I thought it was fun.

That post is also where I found out about wordreference.com which is the best online dictionary I’ve found (and works with several languages). It includes alternate uses and idiomatic expressions for every word, which is extremely useful as a good portion of spoken language is made up of idiomatic expressions and slang.

For drilling vocabulary, I use Anki, a flashcard program which has both desktop and app versions. Whenever I’m reading and I come across a word I don’t know, I look it up on wordreference and then toss it into my list. Vocab is frustrating, but if you can use this app whenever you have a few minutes free it goes a long way.

There are a ton of online language learning programs out there now. The one I’ve been using recently is Duolingo. Its free and I think its really excellent.  There’s also LiveMocha which was recently bought by Rosetta Stone. I prefer DuoLingo but you may as well try them both and see which one works for you.

Learn French by Podcast: runs through a dialogue twice, then goes over the phrases and vocab. Very very good. you can also pay to have access to the transcripts which include a lot of notes.  http://www.learnfrenchbypodcast.com/.

You can listen to the daily radio news digest on RFI and they have a transcript. Stay up to date on current affairs while you learn french: http://www.rfi.fr/lffr/statiques/accueil_apprendre.asp

French in Action is a AMAZING video series that we used to watch in junior high school French class. The storyline centers around Mireille, a pretty french student at the Sorbonne, and Robert, a dashing American who has come for a semester abroad in France. Actually, Robert is kind of a tool and we never actually see him set foot in a university because he is too busy trying to invite Mireille to have a kir with him, but I think we´re supposed to be rooting for the two of them to get together. It was made in 1992 and the music is awesome. You can watch all the episodes here:  http://www.learner.org/resources/series83.html

If you’re at the level where you can kind of listen to a radio program, Radio France has tons of podcasts. I like some of the stuff on France Culture.

I love Arte, the TV network which is a collaboration between France and Germany. Their programming is mostly documentaries and PBS type stuff. I find documentaries and the news easier to follow than films because there’s usually a specific topic they’re covering and you can’t get too lost.

Sure there’s tons of great nouvelle vague cinema out there to watch in French, but I have to admit that I really like the kind of movies you would only watch on an airplane like this one with Audrey Tautou in it. It probably goes without saying that watching movies will help you learn the language.

If you’re only reading, listening, and writing out exercises, it won’t be enough for you to get used to speaking in French. The best way I’ve found to practice speaking–besides moving to a country where French is spoken–is by going to Meetups. You can try one-on-one language exchanges (usually found on Craigslist) but they’re always a bit awkward in my experience. Meetups are nice because you can show up whenever you want and leave whenever you want and everyone there is earnestly into speaking French so its not at all intimidating. There are usually people who can speak at all different levels, from beginners to native speakers, so you can always find a group of people to talk with.

But more than just speaking practice, Meetups are great for getting over your own embarrassment at speaking flawed French with other people. This is very important! You need to learn how to be OK with the fact that you are going to feel like you sound like an idiot for a while. There’s no avoiding this. No one goes to their bat cave, teaches themselves French, and then emerges speaking flawlessly. You will feel like you sound like a toddler for a long time and then one day you won’t feel that way anymore.

If Meetups really aren’t your thing (what, you’re too cool for Meetups?) then your mouth can practice making French words by reading things out loud. Read anything. There are too many newspapers, blogs, magazines and books for me to even try listing them, but here are a few links to get you started:

You can try reading a newspaper like La Liberation or Le Monde.

You can read about music and culture at Les Inrocks.

You can read comics in French at Grand Papier.

The real key to all this is to actually want to be spending your time flipping over flashcards, watching French in Action, doing the Duolingo games, reading Grand Papier and going to Meetups. Or do none of the things I mentioned in this post but make up a curriculum for yourself that fits your life. If you put in the time, it will come little by little. You may feel like you are not improving at all for some time and then all of a sudden you’ll realize that you can understand what you’re reading or that you don’t need subtitles for movies anymore. And then it feels like you’ve just unlocked something great.