As 2015 comes to a close and I finish up work on Rolling Blackouts, I wanted to put together a little postcard fundraiser for the one of my favorite NGOs that works with refugees and displaced people, Mercy Corps.

What’s a postcard fundraiser? If you donate $20 or more to Mercy Corps and then email me ( sarahglidden at gmail dot com) with a screenshot of your receipt and a mailing address, I will send you this Rolling Blackouts postcard with a unique doodle on the back. Here’s my fundraiser page: https://www.mercycorps.org/people/sarah-glidden/syria

(sorry, but I can only mail postcards to addresses in the United States)

More below the photo: 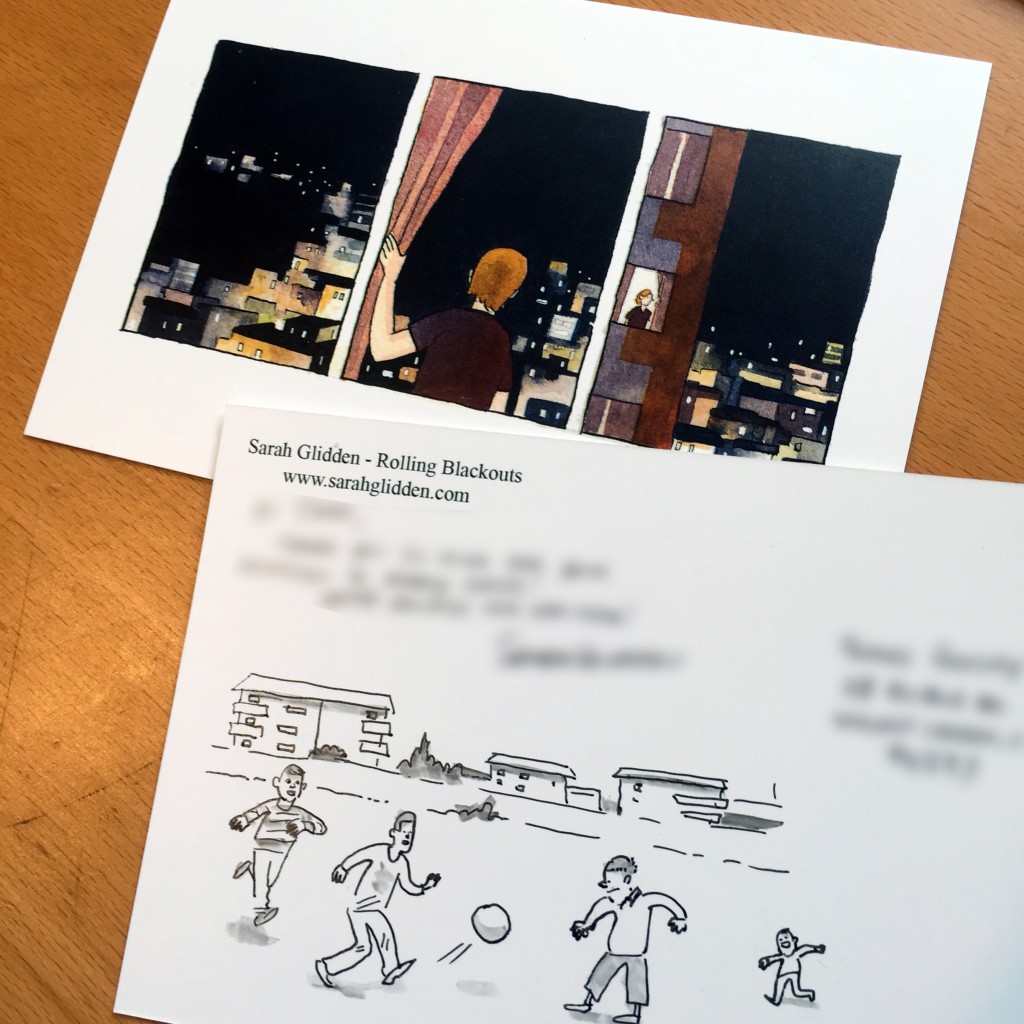 We’ve all been hearing a lot more about Syrian refugees in 2015 as they’ve started arriving in larger numbers in Europe. But the reality is that this is a crisis that’s been going on for four years now, and most Syrian refugees do not have the funds to even risk the dangerous journey to Europe. There are three million Syrians now seeking refuge in neighboring countries like Lebanon, Jordan and Turkey, and many more are displaced within Syria without homes, jobs or access to basic needs.

Mercy Corps was already in Syria and neighboring countries before the war broke out and they are doing good work there. In their words:

“Mercy Corps is currently addressing the urgent needs of nearly 4 million people both inside Syria and in neighboring countries. We have the second-largest operation inside Syria, next to the U.N., reaching an estimated 500,000 people every month.

Even a small donation can be a big help, and this is especially needed now that winter has arrived.

For more information on the refugee crisis and how Mercy Corps is helping, you can go here: https://www.mercycorps.org/articles/iraq-jordan-lebanon-syria-turkey/quick-facts-what-you-need-know-about-syria-crisis

Mercy Corps has a four star (93.66) rating on Charity Navigator. We actually interviewed them in Iraq and Syria in 2010, and we were able to learn a lot about how they work. I definitely trust them with my dollars, I hope you do too.

PS: Mercy Corps actually works with refugee and displaced populations worldwide, not just Syrians, and there are many more people who need aid right now. They’re no less important than Syrians. But I’m aware of the fact that focusing a fundraising campaign on one population sometimes works more effectively. I’m pretty sure that any monies donated to Mercy Corps will also go to help other people in need.