I’m very happy to tell you that Drawn and Quarterly will be publishing a new edition of my first book, How to Understand Israel in 60 Days or Less! I couldn’t be more excited about this. The reprint will be released in the Fall of 2016, at the same time as Rolling Blackouts (also with D+Q).

In the meantime, you can still buy the Vertigo edition of the book online, from your local bookstore or directly from me.

I feel very grateful to Vertigo/DC for taking a chance on my book and for keeping it in print for five years (three printings!) Here’s the story of how that book even came to be, if you are curious and haven’t heard me blab about it before:

When I first started working on this book, I was a relative newcomer to comics, having only been working in the medium for a few years. I never even assumed it would become a “book,” actually. I began self-publishing it by chapter as a black and white minicomic, printing it at a local copy shop and selling it at small-press comics conventions like SPX and MoCCA. It looked like this then: 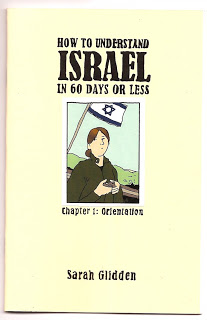 I figured I would just keep making these minicomics until I finished the book, and then maybe I could think about submitting it to publishers if it seemed like people were interested enough. So, when I was selling the second chapter at the MoCCA fest in 2008 and a man with a badge that said “Jonathan Vankin – DC Comics/Vertigo” picked it up and started asking about it, the furthest thing from my mind was the idea that he might be interested in publishing it. I sold him the two chapters I had made so far for $2 each and thought that was the last I would see of him.

A few days later I got an email from Jon telling me that he was an editor for Vertigo and would I like to print my book with them? I was pretty stunned. I wasn’t even really familiar with DC Comics or Vertigo but I DID know that they were a much more mainstream publisher than I had ever expected to talk to. When I met with Jon at the DC offices, he explained that Vertigo wanted to experiment with a new line of  original graphic novels, and that he thought my book could fit in with their vision. I almost wanted to tell him that he was mistaken. My artwork was loose and sketchy and nothing like the other stuff they published. I’d never made a comic over 25 pages long; how was I going to make a whole book??? But Jon really believed in the project and he became my editor. The book came out two years later, in 2010. 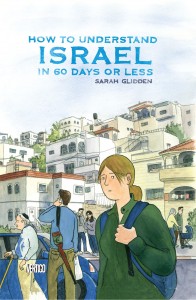 I owe so many thanks to Vertigo. It’s actually because of them that I began working with watercolors. Even though I was an oil painter in college, I had never thought of coloring my work, especially not by hand. But they asked me if I would consider making my book color instead of the black and white it had been previously, so I began to experiment with paint. I eventually fell in love with watercolors (after many, many frustrating hours of failing at using them), and now I use them for almost all of my work. Maybe I would have picked up the brush eventually anyway, but it was the push from Jon and Karen Berger at Vertigo which got me started when I did.

Most of all, they took a huge risk by agreeing to publish my book. I was a newcomer to comics, unknown for the most part and definitely inexperienced. A lot of people thought that I was an odd fit for Vertigo. I even had the wonderful experience of a guy not believing me when I told him my book was published by them. “I know every comic they publish and I’ve never heard of yours,” he told me. As much as I dislike people telling me that I must be mistaken about who my own publisher is, I could understand why he might be confused.

DC and Vertigo have been going through a lot of changes and upheaval over the past couple of years, but the Israel book kept selling and they continued to reprint it as the print runs sold out. It was translated into five foreign languages and it allowed me to go to places I never thought I would see. Hell, if it hadn’t been for that book, I probably would never have gone to the comics festival in Colombia where I met my future husband, Fran! I feel extremely lucky for all of this.

At the same time, I do feel at home with Drawn and Quarterly. They’re the publisher whose books inspired me the most when I was first getting into comics, and I’m thrilled that my work, old and new, will be handled by them. I know they’re going to do a wonderful job with it.